Ancient Olympia is the only place on the entire globe in which the modern world so directly meets the ancient one. From the terrace outside the library of the International Olympic Academy, you can see the Alfeios River Valley, and further to the right, the grove of Altis with the ruins of the Temple of Zeus, where there was once a statue of the father of the gods, recognized as one of the seven wonders of the world.

Nearby, are the ruins of the gymnasium, in which athletes competed nude. A little closer, on the left, is the stadium, with white blocks where athletes would place their feet and be ready for their races. This ancient part of the modern campus of the International Olympic Academy is separated by a strip of asphalt, over which, as a participant of the 26th International Seminar on Olympic Studies for Postgraduate Students, I stepped repeatedly during my nearly three-week stay, walking down to the charming town, and sometimes hitting the Zorbas bar. The green of the football field at the foot of the campus, the blue rectangle of the swimming pool, the red of the sports fields all contrast with the sun-dried, rust-coloured fields behind the campus fence, silent witnesses of ancient competitions. 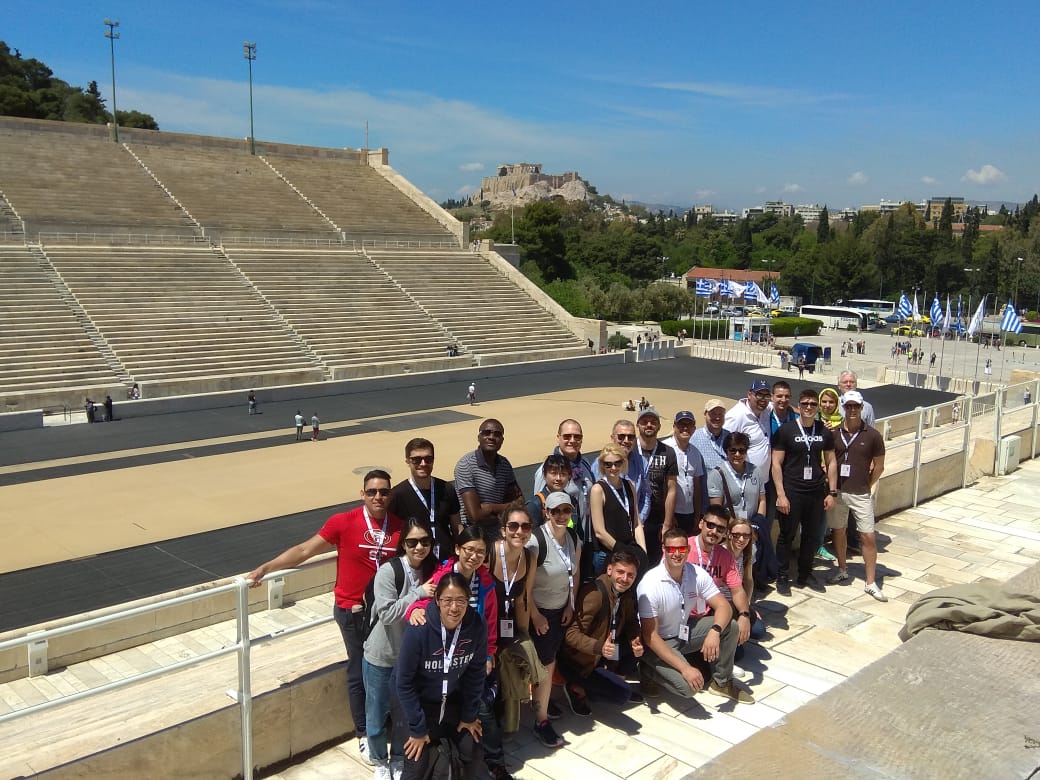 I often recall my memories of last year’s event. The beautiful location of the IOA defies description. Every day waking up to the accompaniment of melodies thronging from the speakers, morning coffee on the terrace by the canteen, and evening sports games. The latter, after returning, I missed so much that in my home I introduced an „hour of sport” rule and every day, my family of five plays matches in the backyard. This will not replace the unforgettable wrestling or karate lessons (greetings girls:)), but it remains a peculiar legacy of what began in 2019 in Olympia.

My participation in the seminar convinced me that my choice of scientific subjects in the field of sport and olympic studies was the right one. It did not change my career orientation because this was specified before I came to Olympia, but it confirmed my belief that the concept of sport can be defined in various ways in scientific research. Sport operates at the interface of various fields and disciplines: history, philosophy, politics, medicine, technology, management and, in recent years, more and more in economics and finance. The number of volumes in the charming IOA library can testify to the range of issues in sport.

If I were to recommend some changes in the organization of future seminars, my recommendation would include more emphasis on showing the broad spectrum of the Olympic Games and of sport itself during lectures and workshops. I particularly mean going beyond the obvious, due to the location of the IOA, and the historical and philosophical framework, and showing, to a greater though not necessarily overwhelming extent, the challenges facing the organizers of sporting events, sports federations, fans and sportspeople themselves today. Using an international, interdisciplinary perspective, Olympic Studies may examine today’s most pressing and far-reaching questions about sport, including the Olympic Games. I believe that addressing such issues as, for example: doping in modern sport, gambling in sport or the economic impact of sporting events would make the formula of the classes more attractive and allow the seminar participants to broaden their horizons, and would perhaps instill new ideas for scientific research.

In addition, it would be worth considering giving scientific publications signed with the IOA abbreviation a higher rank. Nowadays, the best quality studies, whether one agrees with this or not, are published in international journals ensuring citation and recognition on the global market. For example, if, as it is in Poland, a scientific publication in an IOA journal does not lead to certain benefits for the author, in the sense that when assessing scientific achievements, such studies are not taken into account, then there is no pressure to prepare the best studies in qualitative terms or university assistance in the process of preparing such a publication (such as financial support in the field of language correction) does not exist or is very limited. Adopting obvious and proven scientific solutions at a certain level, such as the selection of reviewers or review procedures, on the one hand, avoids bias in terms of reliable article evaluation, and on the other, develops a certain attitude among young people – participants of olympic studies seminars, who are very often at the beginning of their scientific careers.

Personally, the greatest value of the seminar was gaining new acquaintances, wonderful people both on the organizers’ side, led by Professor Georgiadis, the lecturers and the participants themselves – students from all over the world – representatives of each continent. The opportunity to listen to unusual stories recounted by experts should be considered the most valuable intangible benefit of the IOA seminar. I still remember the narrative of Professor MacAloon, who mentioned some interesting stories about the collaboration of secret military services from all over the world in order to perform a joint parachute display at the time of the opening ceremony of the 1988 Summer Olympic Games in Korea. Moreover, there were some intriguing discussions concerning the varying social status of ancient athletes. Although they did not receive financial rewards explicitly, they could count on huge privileges in their respective city states, for example, honorary citizenship, tax redemptions, a statue or free food for life. Probably the most impressive example was the case of Diagoras of Rhodes, of whom a statue is errected at the bottom of the marble steps at the IOA.

I miss the place and the people I lived with for three fascinating weeks. Nevertheless, thanks to modern technologies, the participants of the seminar are in constant contact with each other. We exchange information, report on our achievements and pride ourselves on our successes. My greatest wish would be to meet again someday, although I know this will be extremely difficult. However, I am grateful that we were able to meet during the seminar in Greece last year. This year, it would not be possible in view of COVID-19…